Green River Council 7453 will host a 2nd/3rd Degree ceremony on Saturday, January 18, at 10:00 am at the Youth Hall/Knights Hall southeast of the Immaculate Conception Catholic Church in Green River. Lunch will be provided. Address is 900 Hitching Post Drive. This will be one of the last of the old degrees so we'd like to have good participation. Please contact Mike Dahl by text or call (307) 871-1030.

The four Knights of Columbus degrees are ceremonial classes based on the principles of charity, unity, fraternity and patriotism.

The First (Admissions) Degree introduces the candidate for Knighthood to the virtue of charity. Men are initiated into the organization upon receiving this degree. Councils are encouraged to schedule an Admissions (First) Degree on a regular basis. This ensures the availability for new members to be initiated into the Order quickly after being accepted by the council.

The Second (Formation) Degree is an exemplification of the principle of unity, while the Third (Knighthood) Degree is a course on fraternity. A traditional knighting-by-sword concludes this ceremony, conferring upon the recipients the honors of full knighthood, including eligibility to hold elected office in their councils. Councils wishing to host a Formation (Second) and/or Knighthood (Third) Degree should send a formal request to the State Ceremonials Director. This request should include a few suggested dates, in case there is a State Council function scheduled for the preferred date.

The Fourth (Patriotic) Degree instills pride in one's Catholic heritage and emphasizes the duties of responsible citizenship. Councils wishing to host a Patriotic (Fourth) Degree Exemplification should send a formal request to the District Master. This request should include a few suggested dates, in case there is a State Council function scheduled for the preferred date. 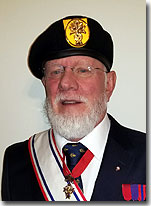